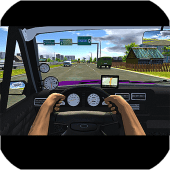 The average rating is 4.50 out of 5 stars on playstore.
If you want to know more about Voyage 4 then you may visit existage support center for more information

All the apps & games here are for home or personal use only. If any apk download infringes your copyright,
please contact us. Voyage 4 is the property and trademark from the developer existage.

Travel on Russian roads with 4 Russian cars + 2 German cars, get to the ferry in the Crimea
Start your trip in Russia from Magadan to the Crimea.
– Hometown and signs based on real-world tracks: P504 \”Kolyma\” M7 \”Volga\” M5 \”Ural\” M51 \”Baikal\”. Some historic memorials.
– Realistic physics and accurate specifications of all cars (including the torque graphs and the gear ratios). Working devices in each machine + 100% realistic lighting. Mirrors. Lights. Thoroughly researched the driver\’s hands. Only in this game driver controls steering wheel and instruments so realistic!
– More than 30 tuning parts for each machine (on foreign cars less) based on real-life parts. Now, not only the engine but also the wheels, xenon and other functional!
– Detailed cars sounds, and now the game has an visual tuning!
– 4 popular Russian car + 2 german cars. Later new cars will be added!
– Now the game has road turns, fork and hills.
– In comparison with Russian Driver 2: Baikal schedule has been greatly improved.
– Russian traffic area number of regions.
– Dynamic time, clouds, day and night, different weather (including rain).
– A lot of settings and a special console for precise optimization.
Compete with other players!
Show the best result of acceleration 0-100 kmh on the test range and compare it with other users online. Hit the top players with your tuned car!
Our group in VK which publishes updates on the game:
https://vk.com/voyage4
Answers to frequently asked questions
Why play permissions to phone calls?
The game is permitted read-only information about the device. Permits reading of contacts, sending SMS, direct calls to the game does not used. Game use device ID to protect information from cheating.
No other action is taken. But it is recommended not to download the game from other places besides PlayStore or trusted sites.
I can not start from the parking lot / I bet on the invisible walls
This problem may be devices with 512 MB of RAM if a shortage of storage VBO data. Especially in combination with the single-core Mali-400 or PowerVR SGX531.
Textures of road/foewst are blurred
GPU your driver is likely not support the resolution on the anisotropic filtering. the problem happens on devices with Mali-400, even today often. Depending on the firmware.
Can I play without internet or Google Play service?
Yes, you can play without a network. But you can not save you result and see other players results in google play.
The game has access to my Google Account?
No, the game only sends a link to your account on Google. Access to an account can not be granted.
The game can not be downloaded / installed
If not downloaded the possible way is close PlayStore application and cleaning of its data help.
Maybe device need more free memory.
sometimes lost connection with Google Play
You have to wait or restart the game.
Do I have to get off until the end of the polygon to show results?
No, it is enough to speed to 100 km/h, and the result will be automatically saved. To go further is not necessary.

How to Play Voyage 4 on PC,Laptop,Windows

4.Install Voyage 4 for PC.Now you can play Voyage 4 on PC.Have fun!