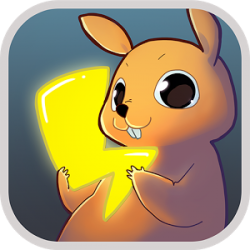 Hamsters are critters that spend all their lives eating, sleeping, occasionally going for a run and not much else. But one hamster decided that there is more to life than just that. Instead of going through the routine of an ordinary rodent, he gathered like-minded hamsters for a trip of their lifetimes. He built a high-tech spaceship powered by his wheel and set for a journey to explore the vastness of the outer space. All he needs before the take off is you.
Your duty is to make sure that the brave hamster does not revert to his idling ways by tapping him or his wheel encouraging him to generate energy and delve ever deeper into unexplored reaches of the universe.
Spend generated energy for special items and clothing appropriate for a heroic space voyager this hamster is (after all, you don\’t want the first space hamster traveling dressed in some old rags, do you?). While the amount of energy the hamster can generate by running is truly astounding, you can add to it by spending a part of the energy yield on alternate sources of energy which will keep the energy flowing even when the hamster is resting. If you want to generate even more, the hamster will always have some rewarding tasks to do. Fulfill them and you shall see the energy levels skyrocketing.
The thought of flying through the space with nothing but void around makes you feel uncomfortable? Worry not! You shall not be alone. In fact, your gnawer friend has a whole fleet of hamster-piloted spacecrafts in support.

How to Play Hamster Universe on PC,Laptop,Windows