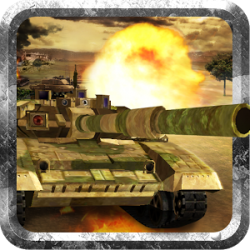 The prosperous city behind the mountainous outskirts of the country is once again facing imminent ill fate of being burnt to ashes, as enemy troops have initiated yet another deadly attack on the city and its people. John Taggert, a man of conviction, is a trained ex-military, who led his army to victory in the first place when war broke out on the city years ago.
Now that the country’s finest have succumbed to the fast flowing, artillery shooting enemy attack, John Taggert is once again called by the military generals as a last resort of defense.
John Taggert is provided with the latest and most deadly war machines the army has. Now his mission is to rescue the city from the claws of enemy gunner tanks and shooters, ensuring the least possible collateral damage.
GAMEPLAY
Navigate through the vast lands of the environments with advanced controls of the gunner tank, including swipe aiming of the tank turret, enemy detection radars and a heavily optimized scope with enemy tagging zoom.
Play through five intense and deadly levels of gameplay, gunning and shooting down enemy gunner tanks, soldiers with death defying attack and heavy impact bombs.
Your primary mission is to remove all resistance and take down the enemy tank army generals, who are ordering and assisting the enemy to attack and raise havoc on the area. The enemy generals will be strongly guarded by gunner tanks and soldiers inside the buildings. You will have to inflict a deadly attack and tear the enemy apart with extreme shooting skills with accuracy, eliminating enemies at point blank range.
FEATURES
– 5 intense levels of gameplay with increased difficulty in enemy tanks and soldiers as you progress further
– Vivid and breathtaking environment graphics and detailed particle effects
– Swift camera and tank navigations for the player tank
– Objective based missions to keep player on his toes at all times
– Scope and zoom enhancements for the tank in first player switching mode for precise aiming
The country’s hopes are once again led on John Taggert as he prepares for a battle he once thought was already won. Will he be able to rescue the city once again from an imminent destruction? Only time will tell.
If you like this action game then do visit the following link for more exciting 3D action, racing, parking and simulation games:
https://play.google.com/store/apps/developer?id=3Dee+Space
Join us on Facebook for regular updates:
https://www.facebook.com/3deespace
You can write us for any improvements or suggestions on our Email ID as we value your feedback.

How to Play Tank Attack War 3D on PC,Laptop,Windows